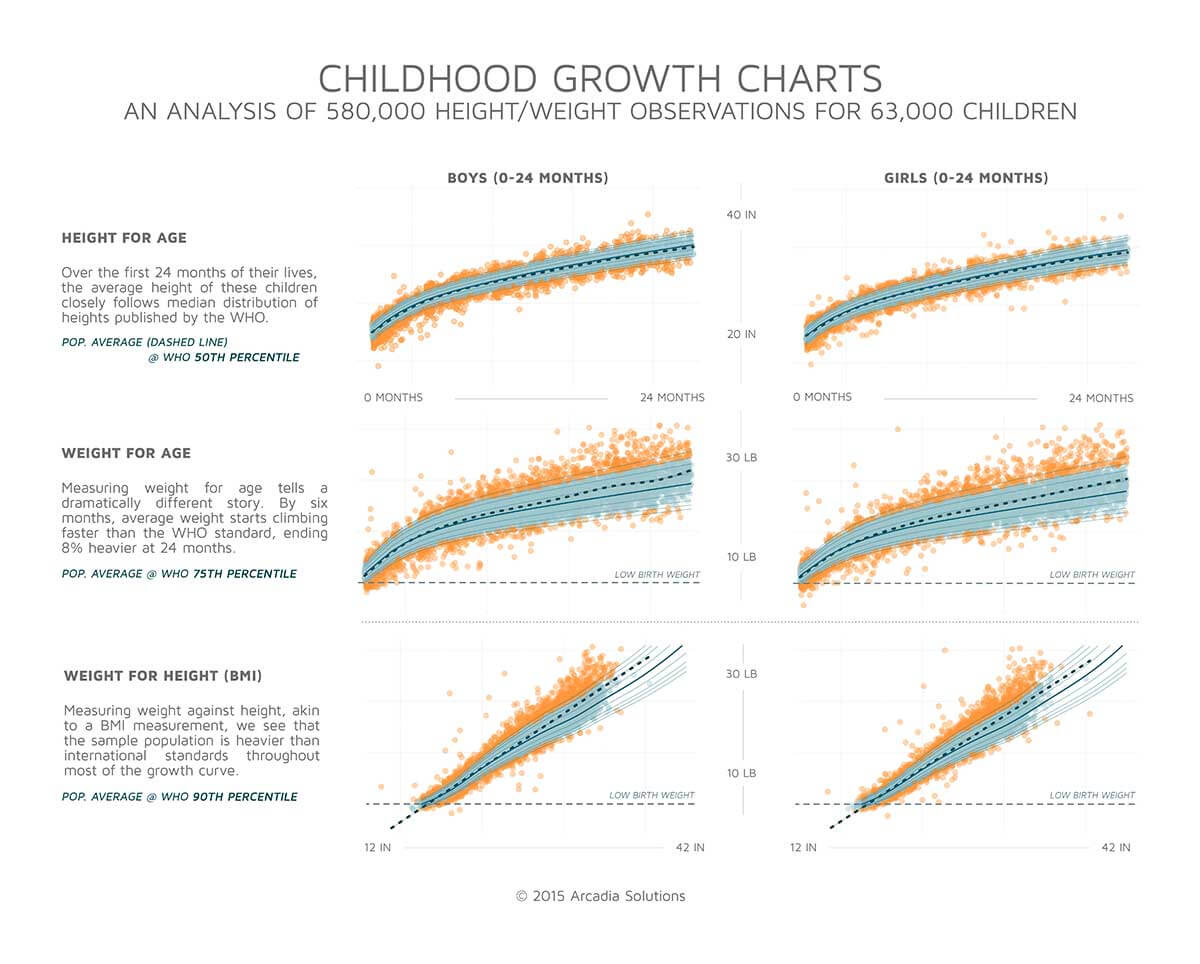 Since the 1970s, the World Health Organization (WHO) has published growth references detailing the growth of children, first from very specific European-derived populations, and later from a more global population, in their first 24 months of life. Most new parents will be quickly familiarized with the WHO Standard Growth Chart, and where on it their young children fall during this crucial period of growth.

The power of the WHO growth chart is amplified when considered on a broader population scale. In this visualization, a random sample of 10,000 age/height/weight tuples were drawn from a pool of 580,000 observations of 63,000 children. The WHO Growth Chart Standard is plotted in blue; the median is plotted in dark blue, with the 2.5th, 5th, 10th, 25th, 75th, 90th, 95th, and 97.5th percentile lines plotted in light blue. Children’s vitals are plotted in cyan, measurements outside the 5th or 95th percentiles are plotted in orange, and the population mean is plotted as a dark dashed line. A grey dashed line is drawn at 2.5kg, the standard for low birth weight.

This visual documents several important characteristics of this population. The children are generally of appropriate height for their age. However, population weight for height and age was high; children in this sample were on average 8% heavier than the WHO standard by 24 months. This information is reflective of the larger adult population from which this sample was drawn, suggesting an overall strategy that may place an emphasis on child health as part of an overall population health program.

InsightsValue-based care and fully delegated risk: Which model is right for your healthcare organization?Many healthcare organizations feel they must move from fee-for-service to value-based care and risk. Here's a deep-dive on what to consider.
InsightsValue-based care (evolved): Achieving provider success amidst accelerating riskAs more healthcare organizations move toward pay for performance, there is a rising need for single care models that deliver whole person care. This results in a patient-first approach to multi-payer contracts.
InsightsBuild vs. buy in healthcare IT: The battle for buy-inFrom the CIO to the VP of Population Health, here's a deep dive into the arguments for and against "building" or "buying" an analytics system.
Press ReleasesArcadia Research Data now available on SnowflakeWe partnered with Snowflake, the data cloud company, to make our de-identified EHR and integrated claims data available on their marketplace.
InsightsHow to steer clear of healthcare data blind spotsAvoid implicit bias, confirmation bias, and other pitfalls of healthcare data blind spots with these helpful pointers.
Product InfoHow to drive risk adjustment outcomes at scaleOur centralized risk platform aggregates and integrates multiple sources to deliver actionable info you need within your existing workflows.