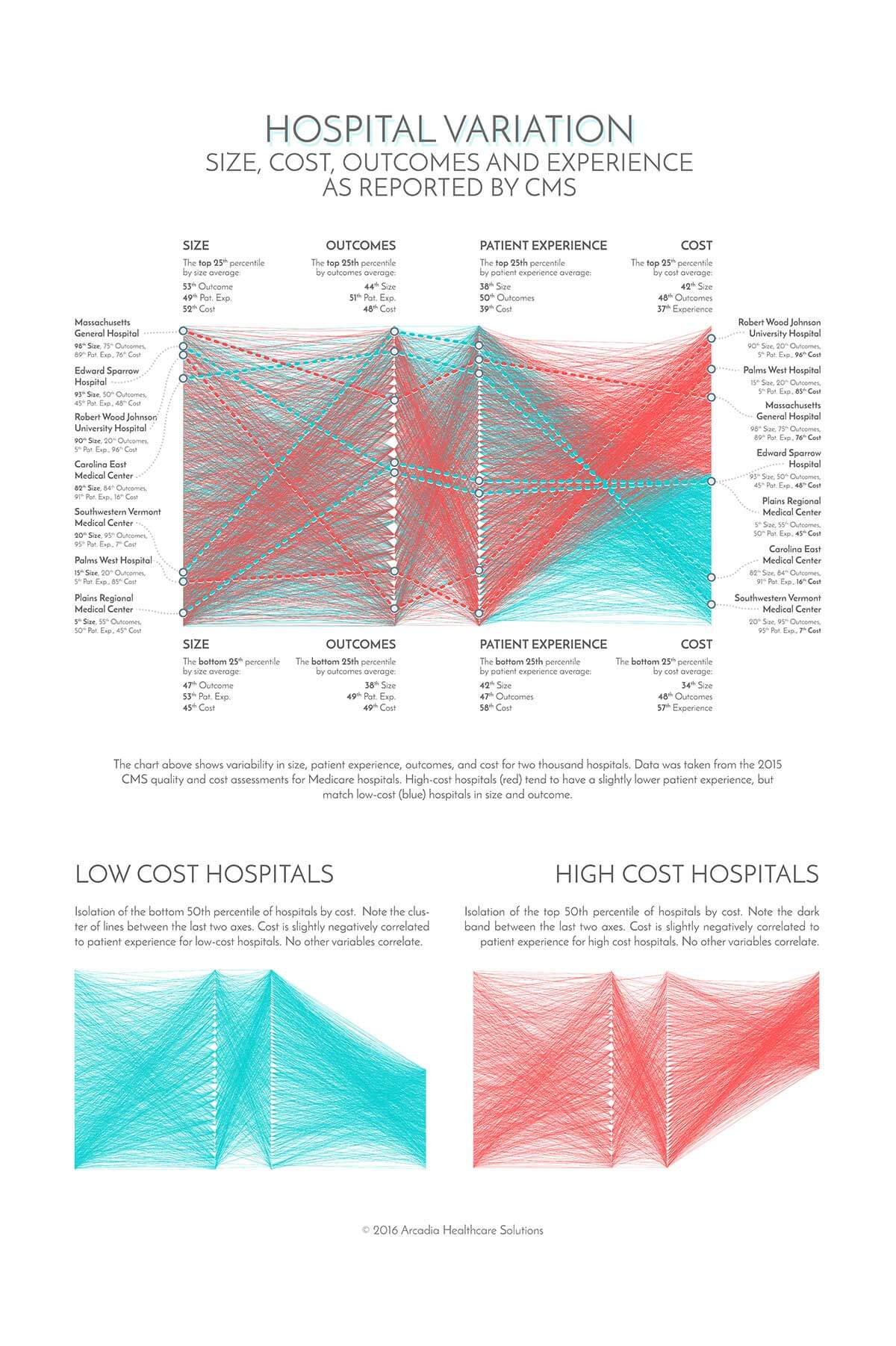 Throughout 2015, CMS dramatically expanded availability of public data on Medicare utilization and costs, including payments to providers and hospitals. For the first time, raw claims data, including billed charges, were available for analysis, along with CMS-calculated quality and outcomes scores. Leading newspapers contributed to the release by offering online tools, allowing anyone with internet access to look up the billed prices and quality metrics of nearby facilities and providers. Suddenly, the general public had access to a new perspective on healthcare pricing.

In this graphic, the artists took a macro view of billed costs, hospital size, quality outcomes, and patient experience. The information is laid out a like a loom, on which threads representing each hospital weave along a path based on those four key factors. Also referred to as a parallel coordinate chart, similar visualizations have been used to monitor air-traffic collisions and population shifts dating back to the 1880’s.

Each of the four axes represents a ranked distribution from the lowest to highest value of each of the metrics. The triangle-shaped gaps on the center axes are formed as each ‘thread’ bends around what would be a ‘reed’ in a real loom. The direction of the various threads indicate correlation between the four factors: a horizontal path indicates similarity between the concepts, while a strong positive or negative slope indicates variability between the factors. Color is used to further classify the hospitals based on their median performance, from blue (lowest cost) to red (highest cost).

Explore a deeper analysis of this data visualization.

Data GalleryMore than a social problem: how housing insecurity leads to higher prevalence of chronic illnessVisualizing the link between housing insecurity and chronic illness, we see higher instances of heart failure, hypertension, and other conditions.
Data GalleryA Long COVID Road TravelledIn a longitudinal study of data from Arcadia, researchers tracked the outcomes of symptomatic and asymptomatic long-COVID patients.
Data GalleryA year for recovery: COVID-19’s impact on service linesAs the pandemic raged, other essential medical services bore the brunt, and data points to an impact in imaging services, testing, and elsewhere.
Data GalleryThis is what the flu looks like: visualizing the 2017-2018 influenza season in MassachusettsArcadia charts a flu outbreak in Massachusetts from November through April, with a pronounced February peak.
Data GalleryA lifetime of healthcare: The costs of 85 years of lifeFollow the changing healthcare costs through the life of a patient from childhood (ages 6-12) to old age (70-85).
Data GalleryThe aging human body: Managing our changing health needsA breakdown of spending in healthcare categories over time, from birth to death, in the life of a patient, from ASD to macular degeneration.