An African-American doctor from Virginia working in Washington D.C.

A Russian dentist studying public health in the United States.

A programmer from Kansas focused on back-end design.

The start of a joke involving a bar or the New York City subway? Not this time. The folks above were the core members of my hackathon team during the “More Disruption Please” hackathon last November.

For those not yet engrained in this super-geeky competitive activity, a hackathon is an intense, collaborative event for computer programmers, tech innovators, and anyone else excited about the Next Big Thing in software and hardware development. Recently, the growing passion for and popularity of these events has helped expand the audience for hackathons from hard core developers to interested folks of all stripes. At this point, nearly every technology enthusiast, innovators, marketing expert, or subject matter experts has contributed to a ‘hacking’ project one way or another.

I am particularly interested in the intersection of technology and healthcare.  So, when my hackathon-veteran friend recommended I participate in “More Disruption Please”, I embraced the opportunity whole-heartedly.

Read the definition above again and notice the description for collaboration: intensive. That is definitely an understatement when describing the intensity of these technology festivals.

The two-day event, hosted by cloud-based EHR vendor (and Boston-area neighbor) athenahealth at their Watertown, MA, headquarters, started Friday night, with a social event / incubator at which participants could meet and begin to form teams. Teams solidified following the official Idea Presentation the next morning. Each team had less than a day and a half to develop, test, and prototype the product for the final pitch presentation.

My first impression of the hackathon was that of organized chaos. I walked into the social event, expecting an evening of relaxing chat with a few participants. Instead, I was greeted by an overwhelming wave of pitches and questions. The room was full of passionate people with a lot of ideas. You could hear the intensity of the technology community in the room.

This trend continued into the next morning, when more than 30 ideas were presented to the audience, each allotted only 45 seconds to sway the interest of the room. I tried to quickly jot down notes, but it was challenging to remember each idea and its presenter after only coffee on a Saturday morning. 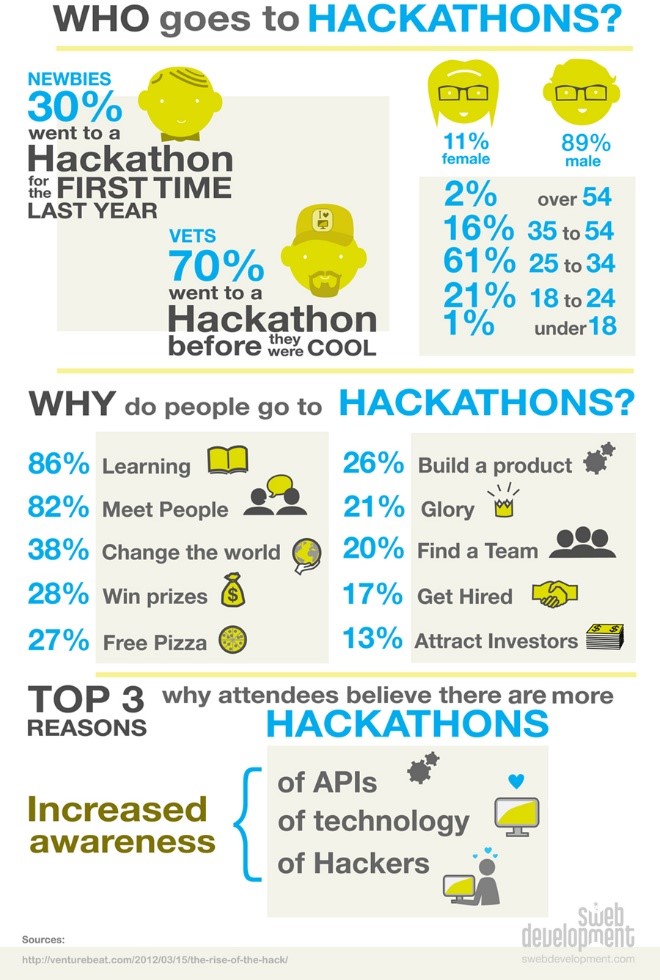 Who Goes to Hackathons. SOURCE: swebdevelopment.com

Then the ‘Marketplace’ opened up for an hour. Every presenter set up a table to interview (and attract) potential teammates. Like fresh fruits and vegetables at the farmer’s market, talents and ideas were the commodity here. To make a salad, you need a variety of ingredients; the same goes for a hackathon team. The data scientist, the marketing expert, the backend programmer, the user-interface designer… A combination of all these personnel could cook up a winning team. While teams looked for individuals with valuable skills, those same individuals were scouting for the right brilliant ideas to help bring to life.

By the end of the hour, I had familiarized myself with the event’s competitive landscape and narrowed my options down to two potential teams. While building a simple, healthy diet checklist for a food bank was appealing, I decided to join the diabetic patient peer support application team.

During this process, I noticed that such decisions, more often than not, were solely based on the compatibility of personalities between members. I was lucky enough to join a group of motivated, brilliant (yet modest), and collaborative individuals with a wide variety of backgrounds. Besides the four eclectic individuals mentioned in the beginning of this post, our team also included a marketing expert, a biological research scientist, a university database architect, and a physical therapist.

Cook up a winning prototype

Our team assembled, we immediately started to transform the idea of a peer support network for diabetic patients into a feasible application.

We decided the means of communication should not have a high technology hurdle; rather, we chose to base user interactions on texting, so the system could accommodate non-smartphone users. We conceived of two separate components of communication: push notices from providers to the users, and peer-to-peer support and monitoring texts. The push notice texts would include broadcast updates, like weekly tips for all patients, to start their conversations. Then each pair or team could use texts to discuss how they would apply those tips in real life. Ultimately, those groups can set up goals together and try to achieve them as a team.

With clinical trial statistics supporting the effectiveness of peer support, we believed this program could alleviate the severity of many diabetic patients’ symptoms. And, since diabetes is the most costly chronic disease for most insurance companies, such an application would be a reasonable investment with potential for considerable cost savings.

After a day and a half of intense collaboration and brainstorming, the time to make the final pitch had arrived. We decided the two presenters would be the doctor, who originated the idea, and the marketing expert, who was the most comfortable with public speaking. After seeing other groups and their prototypes, I felt confident with our product both due to its unique market position and the readiness of a huge customer base.

And our pitch had a great start, presenting the potential impact on the 29.1 million diabetic patients, causing the entire hall to go quiet for a moment. Still, everyone was craving more statistics. As our precious time flew by cruelly on the impressive numbers, our business model suffered, cut short at the end of our brief 2 minutes.

In retrospect, I picked up some valuable lessons about operating in this sort of environment. For example, since we were working on a time crunch, we dove right into product development. While it appeared to be the most efficient approach, in retrospect, we should have spent more time consolidating ideas and unifying our visions. Lacking a unifying vision, we ran into conflicts when the product was already half built. For example, the marketing expert and the research scientist on our team assumed the applications would stay tightly knit with Electronic Healthcare Record systems, while the doctor and I envisioned a more face-to-face interaction between patients and providers offline. Still, we were able to resolve these issues before the final pitch.

Unfortunately, just because it’s a great idea doesn’t mean funding is around the corner. Many other teams shared our fate, although a few did receive financial support to help propel their ideas forward: vaccine delivery drones, a prescription checking app, and a healthcare cost comparison website, to name a few.

Nevertheless, our team still strongly believes in the potential of our application to positively impact the lives of diabetics. We even set up a timeline to continue to move the project forward, even after “More Disruption Please” drew to a close. And, with this great experience, I am ready to embrace the new territory of Hackathon and hack on in the world of healthcare!