What if I told you that it is possible to diagnose rare diseases with mystifying symptoms simply by looking at the patient’s face?

What if also told you that a canyon-like divide separates those patients with mystifying symptoms and the specialists who can identify their condition, delaying the diagnosis, on average, by more than seven years?

And what if you had a chance to close that gap?

That’s the position that my team and I found ourselves in this past weekend at the Grand Hackfest, hosted by MIT’s H@cking Medicine. Over 400 individuals from diverse backgrounds and locales converged on the MIT Media Lab to collaborate on solutions to “pain points” in the healthcare domain. Organizers split the event up in to separate “tracks”, which sought to address problems in specific areas, such as diabetic population health or telehealth and mobile technology.

That was how my colleagues and I met Dr. Sharon Moalem, MD, PhD, as he pitched his pain point to the Global Genes Rare Diseases track, a focal point for issues faced by patients and providers suffering from or engaged with rare diseases. Dr. Moalem has been working on developing a mobile application called Recognyze, which can identify facial structures via facial recognition technology. His challenge to participants was to expand this functionality to measure and detect characteristics associated with specific rare diseases.

It turns out that there are many specific facial features that are very closely associated with an array of rare and difficult-to-diagnose diseases. If a parent knows how to both measure the distance between his or her child’s pupils and also compare that value against a developmental chart, that parent and the child’s physician might be able to more quickly identify symptoms of hypertelorism, immediately narrowing the scope of the diagnosis search from over 7,000 rare diseases to just 17.

Expand this tool for use by first-line physicians, who are often not trained to recognize such diseases, and their ability to help patients on this “diagnosis journey” expands rapidly.

Our team was called “Facial Metrics”. There were eight of us. Students and professionals, coders, engineers, a biostatician, a researcher at Dana Farber, a Sloan graduate, and myself.

And we decided to take on Dr. Moalem’s challenge.

We decided to approach the problem of accelerating rare disease diagnosis by proving that certain measurements could be computed from coordinates produced by the Recognyze app. That way, a Recognzyze user could begin the diagnosis process without an in-depth background in facial morphology.

We began by building a Python script that transformed the plotted coordinates provided by Recognyze into a series of specific facial morphology measures, such as the angles of the eyes. Such textbook measurements can serve as a developmental indicator of Marfan’s Syndrome, for example.

Discrete measurements of absolute distances can provide greater insight into more diseases, but are trickier to obtain. Eyeglasses company Warby Parker overcomes the challenges of measuring interpupillary distance via a webcam photo by providing a standard point of reference (in their case, your credit card).

Making both a size-appropriate as well as symbolic calibration choice – our solution shouldn’t require a credit card! – our calibration standard was just a quarter. 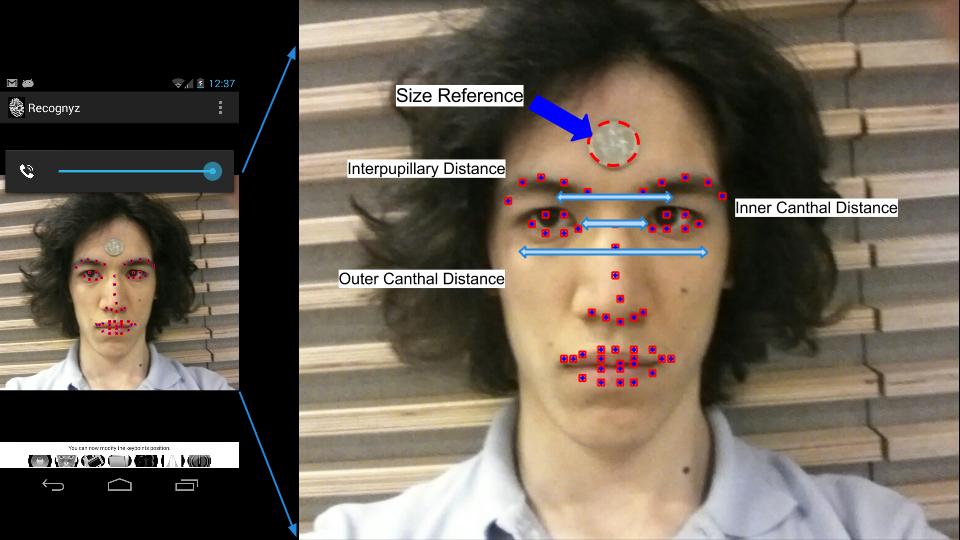 First, we were able to measure our teammate’s facial features using the app.

Then, as Dr. Moalem pulled up images of individuals with Waardenburg, Kabuki, and Marfan Syndromes, the measure script we developed successfully identified the underlying disease. (Well, with some tweaking. It was a hackfest, after all…)

Don’t go searching for a complete diagnostic version of Recognyze on Google Play just yet. This proof of concept just demonstrated the merit of extending the application. Measures can be built to aid in the measurement, identification, and referral processes.

And, to be clear, we did not clinically diagnose anyone, nor could we. (That said, the script suggested that team member Sean had measurements considered “normal” by the textbooks we referenced. He was happy to hear this.)

For pitching the Best Hack in the Rare Diseases track, our team won a $1,000 prize, which we offered to put back into the development of Recognyze, but Dr. Moalem refused. 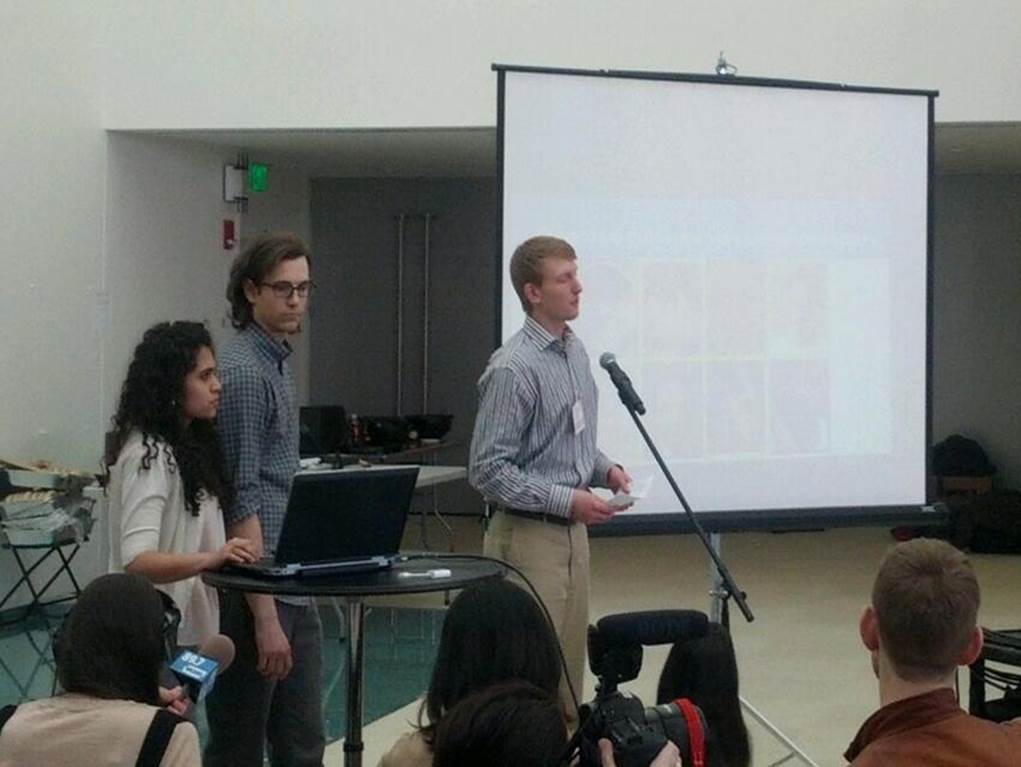 Beyond the prize, however, my bet is that this proof of concept will draw more support to Dr. Moalem’s idea for building broader diagnostic capabilities directly into Recognyze.

Expanding the app and putting it into the hands of clinicians and family members offers the promise of reducing the time to reach a diagnosis for some of these diseases from over seven years to just a few months. Early diagnoses can prevent the worsening of chronic conditions, avoid dangerous and expensive late-stage treatments, and provide a better quality of life for affected individuals and their families.

Incidentally, this wasn’t my first health IT-focused hackathon, and I don’t think it will be my last, either. Boston seems to be a hotbed of activity, not just for hackathons, but for other events in the healthcare technology space.

To once again paraphrase a participant in the previous hackathon, it’s a great way to spend the weekend!

The Hackfest was also covered on WGBH. The article, featuring Dr. Moalem and Facial Metrics’ hack, is available here.